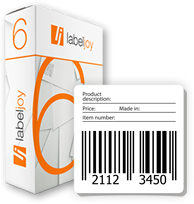 With Labeljoy you can easily generate EAN 128 barcodes. EAN 128 is a symbology that accepts a large set of characters. EAN 128 was derived from the olderCode-128, a high- dense barcode symbology. This symbology is used for alphanumeric or all-numeric barcodes and can encode all 128 ASCII characters.

EAN-128 symbols are different from Code 128 symbols due to the implementation of the FNC1 character used as data start and separator.

For example, the text 123456|ABCDE will be interpreted by Labeljoy as 123456[FNC1]ABCDE and the barcode symbol will be generated accordingly.

How to create EAN 128 code with Labeljoy

With Labeljoy, you can use the EAN 128 symbology to create barcodes that are similar to GS1-128 but fully customizable and not subject to the limitations of GS1-128 specifications.

Text concatenation:
When an EAN-128 barcode element is generated by concatenating fields or counters, the following rule applies:

If a value is found that does not comply with the above rules, the barcode will not be displayed.
The visually readable text can also be displayed above the symbol or hidden, according to the setting specified in the Text combo box.